A comprehensive history of the Parish can be found in the book ‘BETTWS Y CRWYN’ – History, Geography Farming & People. This book was compiled by the residents of the parish, and published in 2007. There are a few copies still available from Alan Wilson.

Request for copies may be made via this website.

Picture the profile of Shropshire as a face looking with some alarm westward; the nose Long Mountain, the mouth the Camlad valley, then Bettws y Crwyn adorns the point of the chin.The parish name is taken from the church. It is roughly circular, nearly five miles in diameter. Neighbours on the east are Llanfair Waterdine and Newcastle. The boundary to the north is the Kerry Ridgeway, in the west the Rhddwyr brook and in the south the Teme. Over these three is another country, the cause of the alarm, now pacified by Sunday opening.  The Upper Short Ditch across the Kerry Ridgeway dug before Offa’s Dyke, the Norman motte at the Moat beside the Teme and Castle Bryn Amlwyg above the Rhyddwyr brook overlooking the junction of Radnor and Montgomery were each created with considerable effort to have some deterrent effect on the Welsh. their legacy is to define the border.  They did the job politically, but failed to keep the language out; half the place names in Bettws are Welsh, not least St Mary’s.

The names are Welsh because, to all intents and purposes the area had been Welsh.

The Upper Clun valley was the ‘Welshry’ of the Lordship of Clun which never became part of England in a formal sense until the C16th. It was a semi-independent Marcher land. First given after conquest to one Picot le Say, who built Clun Castle,  then eventually owned by Fitzalans – who joined up with Howards. The present owner of the castle is the Duke of Norfolk – and one of his titles in Baron Clun! The boundary as we know it now was not formally decided until Henry VIII took control of all the marcher Lordships and put them into Counties. Even then Clun was officially in Wales (Montgomeryshire) until being removed by Act of House of Lords in the C16th and put in Shopshire.

As in most border areas the ‘English side’ is characterised my many Welsh names, while on  the ‘Welsh side’ English names are found.

Castell Bryn  Amlwg, now known locally as Castle Cefn Vron in the parish of Bettws y Crwyn was built around the year 1200 on a west facing site on the Anchor Farm close to the border with Wales.  In the valley below are the streams that divide the counties of Shropshire, Radnorshire and Montgomeryshire. It is one of the places in Britain where, in two strides, a person can claim to have been in three counties.

The site of the castle is now grassy mounds, but it can still be seen what a huge fortress this must have been when it was built. The mounds clearly show that there was a large  keep and surrounding curtain walls.

In 1955 a seed merchant from Shrewsbury bought Anchor and Cefn Vron farms decided to take the law into his own hands and and bulldoze the remaining walls for stones so that he could construct a road to connect the two farms. A member of the public reported the destruction to the police.

The owner and his workforce were summoned to appear before the magistrates court in Clun  in 1955. The seed merchant instructed his work force to admit to all offences, and the prosecution, believing they had won the case were left with egg on their faces when the seed merchant took the stand and his solicitor told the court that as over twelve months had passed since the offences were committed his client had no case to answer. As a result the case was dismissed with costs to the defendant.

There was a small excavation in 1963, when a plan was made by the archaeologists. This is conjectural, based on cuttings and stones found. 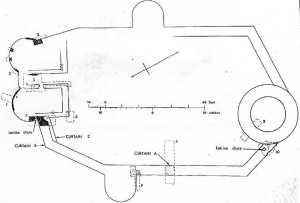 The Cantlin Stone lies at the northmost edge of the parish at 1600 feet. The stone was used to mark the place where a pedlar died travelling along the Ridgeway in 1691. His death in January was probably from exposure. There was a dispute between Bettws and Kerry parishes over who should bury him. Bettws did but claimed the ground where he lay, presumably on the north side of the road.

The circumstances have been handed down verbally from generation to generation, and accounts and opinions differ. However, what is sure is the entry in the record on burial at Bettws Church: William Cantrell buried 17th January 1691, together with the first Ordnance Survey (1835) showing a strip of land enclosed by the border north of the Ridgeway and west of Upper Short Ditch with the Stone at its western corner. The inscription reads

At some time it was moved to its present position, the field owned by William Botfield of The Hut.  His brother Beriah, the MP for Ludlow had a celtic cross cast in concrete and erected by the stone. Later the fence around the monument fell and the cross was broken (in 1970)

For the millenium the Parish Council obtained a grant and had a replica carved in York Stone.  The fragments of the Botfield Cross are in the Bettws churchyard lying on the unmarked slab of the pedlar’s grave.

Cantrell over time has turned into Cantlin. The name is said to be a compound of Can’t and Tell:  the indignant parish put to the expense of burying a stranger determined to give him a name?

The border now runs neatly along the north side of the Ridgeway, but it is possible that the kink at 189872 is a memory of the argument.

This site uses Akismet to reduce spam. Learn how your comment data is processed.